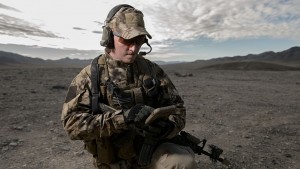 When I recently set out for the Pentagon’s R&D department, I instead found myself in front of a downtrodden shopping mall in Arlington, Virginia. I’d been navigating the old fashioned way—with my eyes—but when I pulled out my smartphone there it was, clearly marked in the Google Maps app: DARPA.

It turns out that the unmarked spaceship of a structure that DARPA calls home is tucked neatly behind the Ballston Common Mall. When I eventually found the right entrance and stepped inside the lobby, everything suddenly felt familiar. The clean lines and shiny surfaces would look right at home at the office of any number of large tech companies I’ve visited. The metal detectors, however, would not. The security desk promptly snatching my smartphone away before I headed for the elevators would’ve also been out of place at most startups, whose executives are just as tethered to their devices as teenagers with bad Snapchat habits. Of course, most tech companies aren’t tasked with developing weapons of warfare, like super strong humanoid robots and drones that fly out of submarines.

DARPA does a lot more than build weapons, however. The same government agency that invented the internet and laid the groundwork for America’s thriving startup culture is now trying to act more like a startup itself. Put simply, DARPA is making smartphones battlefield-ready, so that soldiers can take full advantage of the same mobile technology that’s improved the lives of countless civilians in recent years.