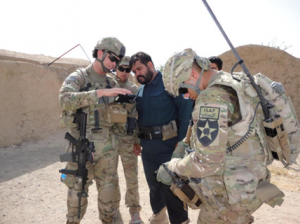 The technology used to plan military missions and navigate in unfamiliar environments has changed dramatically for soldiers in the past 20 years. From paper maps and shortwave radios in the 1990s to accessing real-time data on smartphones today, warfighters can carry out missions with more efficiency than ever before.

One way this is made possible is through the Defense Advanced Research Projects Agency’s (DARPA Transformative Apps {TransApps} program), which uses secure applications to deliver high-resolution imagery directly to dismounted troops via handheld Android devices in real-time. The program includes mission-planning tools that can overlay user-defined data directly onto digital maps, allowing soldiers to be up-to-date on any changes in surrounding areas. For example, TransApps can show soldiers if there are any man-made objects, obstacles, or IEDs in their path, along with the locations of previous attacks and planned missions.

“Apps are part of everyday life in the consumer world, but mirroring those capabilities for a tactical user community presents many unique challenges,” said Doran Michels, TransApps program manager, during a Dec. 3 media conference call to discuss the program.

Doran explained how the new and unfamiliar area of tactical apps required DARPA to create government standards and build the apps securely. Organizational and technical challenges equally existed in the creation of the technology. DARPA had to navigate through policy and the DoD bureaucracy, as well as write a great deal of software and create new processes for securing data, he added.

Following approval in 2010, TransApps was deployed to Army personnel in Afghanistan in 2011. Over 18 months of field trials, DARPA researchers provided 3,000 TransApps mobile devices to all Army brigades in Afghanistan.

Army Maj. Tim Terese, who used the program during his most recent deployment, emphasized the importance of data communication and collaboration using TransApps.

“It gives the flexibility a soldier needs,” Terese said. “They say a picture is worth a thousand words, and in this case, it truly is.”

Terese said the Android device was simple and comfortable for soldiers to use to collaborate and internalize data flow, track movements and operations, and debrief and replay missions.

DARPA currently has more than 50 apps available through TransApps.

Recently, DARPA hosted a Geospatial Mobile Integration Technical Exchange summit to discuss mobile imagery in the context of TransApps capabilities, as well as technical standards and policy for better disseminating imagery among potential TransApps users. Representatives from the military, federal agencies, and the GEOINT industry participated.

“Mobility for tactical is very much an unsettled frontier, all the stakeholders need to work collaboratively if we want a coherent solution with enduring capabilities,” Michels said.